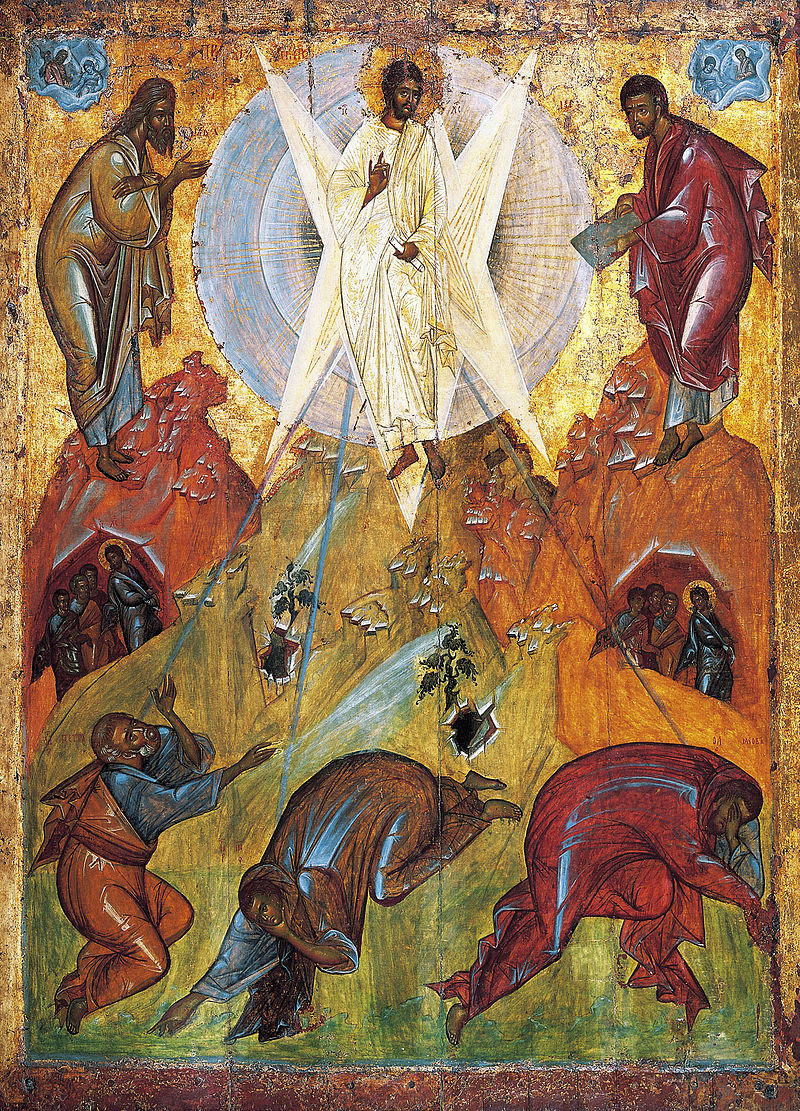 Today is the Feast of the Transfiguration. Falling in the middle of the summer months and in close proximity to the Solemnity of the Assumption of the BVM (15th August), it seems to be the forgotten feast day of the liturgical year. It marks the day when Jesus ascended a mountain (traditionally considered to be Mount Tabor) with Peter, James, and John. On the mountaintop, Jesus is transfigured before their eyes with his face and clothes becoming unbearably bright. Both Moses and Elijah at Jesus side and begin conversing with him. Finally, a bright cloud appears and a loud voice declares out of it that Jesus is his beloved Son. On hearing the voice, the three disciples fall to the ground in fear but Jesus reaches out to touch them and reassu. re them. As soon as they look up, Elijah, Moses, and the cloud are gone. They descend from the mountain with Jesus instructing them not to tell anyone about what they had seen until after his Resurrection. This account is found in all three of the synoptic gospels (cf. Mt. 17.1-8, Mk. 9.2-8, Lk. 9.28-36) and is possibly alluded to in John's Gospel (cf. Jn. 1.14).

Thomas Aquinas devotes an entire question in the third part of his Summa to this incredible event in the life of Christ. He writes that the purpose of the Transfiguration was to give the three disciples an encouraging vision of not only the glory that awaited Jesus after his Passion, Death, and Resurrection, but also of the glory that awaited them (and, by extension, us).

We read in the accounts of the Transfiguration that God the Father speaks out of the bright cloud in order to proclaim Jesus' divine sonship. This is, of course, the second time that the Father has done this--the Father spoke out of the cloud at Christ's Baptism (cf. Mt. 3.13-17, Mk. 1.9-11, Lk. 3.21-23). As such, these two events in Jesus' life are closely connected. Jesus came to give Grace by his actions, and to promise Glory by his words. As Aquinas writes, Jesus, at his Baptism, demonstrates to us that first step to receiving Grace--namely, receiving baptism. In turn, the Transfiguration functions as the foreshadowing of the Glory that comes from the triumph of Grace. Aquinas concludes that the Father proclaims Jesus' divine sonship at both the Baptism and Transfiguration in order to emphasize the availability of Grace and Glory to humankind whilst keeping us mindful of the fact that it is only available through Christ, the True Incarnate God.

O Nata Lux
Music: Morten Laursiden (b. 1943)
Words: Office Hymn on the Feast of the Transfiguration
Artists: Los Angeles Master Chorale/
O Nata Lux by the contemporary American composer Morten Laurisden is taken from a larger scale choral work entitled Lux Aeterna. Composed in 1997 on the death of Laurisden's mother, it is scored for choir and orchestra and takes the form of a non-liturgical Requiem. It sets a handful of texts from the traditional Missa Pro Defunctis along with the Veni Sancte Spiritus (the Sequence for Pentecost), a verse from the Te Deum, and O Nata Lux (the Office Hymn for Lauds on the Feast of the Transfiguration).
O Nata Lux falls in the middle of the work and functions as an a cappella motet/interlude. The lush, sonorous harmonies and memorable melodies contained within the piece are typical of Laurisden's style and call to mind his famous setting of O Magnum Mysterium which he composed three years earlier.
MA.
August 6th 2020

Popular posts from this blog

The Basilica of St Mary Major is one of the four Major Basilicas of the Latin Church. Built in the fifth- century during the papacy of Liberius, it is the largest Marian church in Italy and one of the three oldest Marian churches in Rome (the other two being S. Maria Antiqua and S. Maria in Trastevere). From the fourteenth-century onwards, a popular legend was associated with its foundation. According to legend, the Virgin Mary appeared on an August night to command a wealthy Roman patrician to build a basilica in her name on the spot where snow would miraculously fall the following day. The following morning, snow did indeed fall on the Esquiline Hill and the Basilica was soon built on the spot. As a result, it bears the affectionate nickname 'Our Lady of the Snows'. The legend is commemorated each year on the 5 August (the Feast of the Dedication) with white rose petals being dropped from the ceiling during Vespe…
Read more

Maundy Thursday  Station at the Archbasilica of St John Lateran
On Holy Thursday, the Pope celebrates the Mass of the Lord's Supper in his Cathedral Church: the Basilica of St John Lateran. As the mother church of the Diocese of Rome (and the whole world), it is an apt location for the Mass that marks the Institution of the Eucharist--the nexus of our sacramental life as Christians. The Basilica also contains what are purported to be fragments of the table from the Upper Room. They are located in a large, gilded reliquary high above the Blessed Sacrament Altar (see picture).
The Mass of the Lord's Supper is probably the most surreal Liturgy of the Western Church. It is a Liturgy of contradictions and conflicted emotions, a Liturgy in which the joyful Gloria in Excelsis is juxtaposed with a night of fear and despair in Gethsemane.
Holy Thursday is sometimes known as Maundy Thursday. The word ‘maundy’ refers to the first word of the first antiphon sung during the Ceremony of Foot …
Read more

Good Friday  Station at S. Croce in Gerusalemme
It was now about noon, and darkness came over the whole land until three in the afternoon, while the sun’s light failed;and the curtain of the temple was torn in two. Then Jesus, crying with a loud voice, said, “Father, into your hands I commend my spirit.” Having said this, he breathed his last. [Luke 23:44-46]
It was at 3pm on the Passover Day in the year 33, that Jesus died himself upon the cross for our sins. It is no coincidence that this occurred at 3pm--this was the Hour of Prayer for the Jews and the time at which the evening sacrifice was slain.  Through the omnipotence of his divine nature, Jesus could have prevented his own death. No man or creature on earth has the authority or power to kill the incarnate God [Jn. 11:17b-18a]. Jesus alone possessed that authority and power, and it is he himself that slays the Lamb of God upon the Altar of the Cross--that is why Jesus dies on the cross only after having commanded his spirit into …
Read more